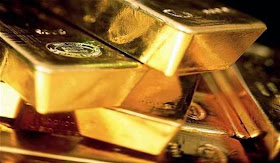 In a fascinating reaffirmation of the fundamentals of the gold bull market, US Banks & Large Traders as defined by the CFTC as being, “commercially engaged in business activities hedged by use of the futures or option markets,” have quietly flipped from being tremendously short gold in late 2012, to now being tremendously long.

Furthermore, the speed of this change in positioning has occurred at the fastest rate since the data set began in mid-2000.

As shown below, on a month over month basis, US Bank & Large Trader long positioning has increased dramatically, with short positions being covered at the greatest rate of speed ever recorded: 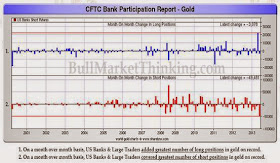 (click to enlarge)
Additionally, when looking at this trend from a “total-position” perspective, we see an even greater accumulated move being made on both the long and short sides. Short positioning by US Banks & Large Traders has been collapsing since the beginning of 2013, while long positions are being steadily accumulated: 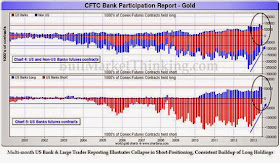 [But] considering who the sharks in the water are (JPM), I can well suppose the positions [are] being set up to rip off the speculators again.”

He further commented that, I don’t know how long and [how big] this buildup [will] become, but it’s like everyone’s rushing from one side of the boat to the other…[and] it’s building into a most bullish position. It creates violent reactions. So yes, we could well be seeing a massive short squeeze soon.”
—
Bottom Line: While the mainstream financial media continues its attack on gold, US Banks & Large Traders are now joining the world’s top hedge funds in being shockingly long gold—and they are making that move incredibly quickly.

This is another small (yet very significant) sign that the gold market is quietly changing its character.
—
Enjoy the article? Please support the site by sharing this URL page link with friends, family, and your favorite chat forum.